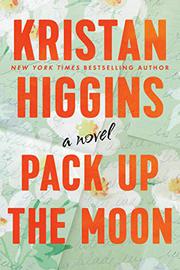 PACK UP THE MOON

A young widower begrudgingly attempts to move on when he receives assignments from his beloved late wife.

Joshua Park has never had an easy time getting close to people. He’s brilliant, with a Ph.D. in mechanical engineering and a job as a medical device engineer, but as someone on the autism spectrum, he often doesn’t pick up on social cues. But none of that is an issue with his wife, Lauren, a public space designer. The two of them are madly in love with one another—and then Lauren is diagnosed with idiopathic pulmonary fibrosis, a disease in which fibers grow in her lungs and make breathing difficult (and, eventually, impossible). Her terminal diagnosis means that their marriage will be briefer than they ever imagined…but, unbeknownst to Josh, Lauren has a plan to take care of him when she’s gone. After Lauren’s death, Josh doesn’t know how he’ll get through the day, let alone the rest of his life. But then the first letter comes. Before her death, Lauren wrote him a letter for each month of his first year without her, each one containing a task that will help him keep going. They start out relatively easy (going to the grocery store) but gradually require him to open himself up more. Lauren’s instructions initially annoy Josh, but eventually he begins to connect with new people—and the people who were already there for him. Higgins deftly navigates a premise that could’ve been sappy and instead turns it into something poignant, realistic, and occasionally even funny. Josh and Lauren never seem like caricatures of a grieving widower or a selfless, angelic dead wife. Instead, they are fully rounded characters with flaws and eccentricities. The story alternates between Josh’s present-day attempts to live his new life and Lauren’s point of view in the past, making her feel like a real person instead of just a saintly presence. The amount of detail around Lauren’s disease is both impressive and heartbreaking to read. The characters surrounding Josh and Lauren are all complex and quirky, and seeing Josh accept love from the people in his life, both from new friends and old family members, is just as sob-inducing as reading about how he loses Lauren.

A moving and life-affirming portrait of grief that’s sure to bring the tears.