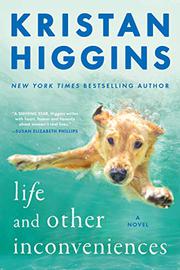 LIFE AND OTHER INCONVENIENCES

As her teenage daughter endures bullying from her former best friends, Emma gets a call from her rich grandmother—who threw her out when she became pregnant and hasn’t spoken to her since—asking them to spend time with her before she dies.

Despite a complicated and painful childhood, Emma London has clawed her way to a successful, happy life, living with her maternal grandfather in Chicago and raising her perfect, beautiful daughter, Riley. Things take an unexpected turn at the end of Riley’s junior year of high school, when her lifelong best friends turn on her, and Emma’s estranged paternal grandmother, Genevieve London—who owns a high-end fashion and lifestyle brand and is considered “a style icon and an industry leader”—asks her to bring Riley and spend the summer with her in Connecticut since she’s dying of cancer. After her mother died when she was 8, Emma lived with Genevieve for 10 years, until right after she graduated from high school and discovered she was pregnant. Genevieve hasn’t spoken to her since. At first Emma is determined not to head east, but once Riley’s former friends become abusive, she packs up and gets away with her daughter. The summer is full of shocking secrets, surprising twists, and unexpected grace. Despite their differences, Genevieve and Emma love each other fiercely, and once Emma understands what Genevieve is truly up against, she turns woman warrior on her behalf while also creating a new life for herself and Riley in the place she’d never expected to come back to. Higgins explores another set of deeply affecting topics using engaging characters and a full spectrum of realistic emotions: humor, anger, anguish, and pride, among others, but above all, hope.