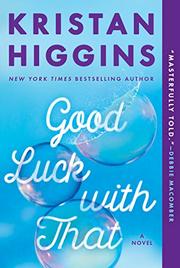 GOOD LUCK WITH THAT

Two friends who have fought weight issues their whole lives must decide how to move forward when another friend dies after reminding them of a list of "someday" tasks they created as teens to help them appreciate their lives.

Georgia, Marley, and Emerson met as girls at Camp Copperbrook—a summer camp where they were sent to lose weight—and have remained friends since. When Emerson summons Marley and Georgia, they are stunned to learn she is morbidly obese and dying of a variety of ailments, including a blood clot in her lungs. "Why hadn't she told us? I knew the answer: shame." With her last breaths, Emerson hands them an envelope which contains a list of “Things We’ll Do When We’re Skinny” that they created at camp years ago. The two friends agree to follow the list. Obviously, Emerson’s goal for Marley and Georgia is to build lives that make them happy, since their unhealthy obsession with being physically smaller has diminished them emotionally. Georgia, who’s left a law practice to become a nursery school teacher, must re-evaluate difficult family relationships and try to keep her beloved and emotionally vulnerable nephew safe while revisiting the end of her marriage. Marley’s unresolved issues include a twin who died very young and the man she’s been involved with for five years, who treats her like a booty call. Higgins explores a very complicated emotional landscape through the lens of three friends who’ve endured society’s hateful attitude toward heavy people. Emerson, the largest and most besieged, tells her point of view through diary entries leading up to her death. The ending is uplifting, but the book may be a difficult read for women who routinely live through such judgment and hostility.

Higgins’ astute, perceptive eye to the best and worst of human nature enhances the poignancy of a sensitive topic, which she navigates with humor and grace.