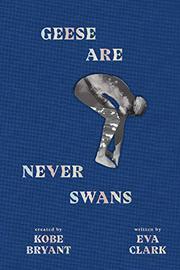 Sixteen-year-old Gus Bennett lives in the shadow of his older brother, Danny, a former Olympic swimming hopeful who recently died by suicide.

Gus does not have an easy home life: He has a strained relationship with his mother, a single parent who’s still struggling after Danny’s death; and his older sister, Darien, has a drug addiction and abandoned her now 18-month-old child to the care of their mother. But Gus hopes to train with Coach Marks, the renowned trainer who worked with his brother. He even sneaks into the country club to get access to the pool, willing to do whatever it takes to succeed. He has his eye on qualifying for the national team and seems poised for success, but he soon experiences a downward spiral and engages in reckless behavior. Although the side characters are underdeveloped, Gus’ first-person narration carries the story along smoothly. Conceptualized by the late Academy Award–winning basketball player Bryant and written by Clark, this emotional novel contains lyrical prose that beautifully captures the energy of swimming and short chapters that will keep readers engaged. Physical descriptions are limited, suggesting a white default, but naming conventions suggest some diversity among the swim team members.

An earnest examination of mental health in sports.