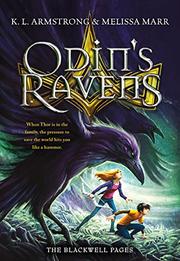 From the Blackwell Pages series, volume 2

In the second installment of Blackwell Pages, 13-year-old Matt Thorsen and his friends Laurie and Fen, descendants of Norse gods, race to prevent the apocalypse.

If the road to hell is paved with good intentions, the way to the Norse version—Hel—is paved with fire giants, killer guard dogs, Viking zombies, a river of acid, cave bears and even a Hel Chicken. Picking up where the first volume concluded, this tale has Matt and company going to Hel to save their dead friend, Baldwin, but then they must figure out how to get out alive in time to defeat the Midgard Serpent and stop the Norse end of days. If they fail, the world will be plunged into an endless winter. This sequel stands by itself, as essential details of the first are neatly woven throughout. Intense action, well-crafted scenes and humor-laced dialogue add up to a sure winner. Just enough black-and-white illustrations add a visual dimension to the vivid text. What Riordan has done for Greek and Egyptian mythology, Armstrong and Marr are doing for Norse myths, and readers will come away knowing much about Valkyries, Berserkers, wulfenkind and draugr.

A Hel of a good read.