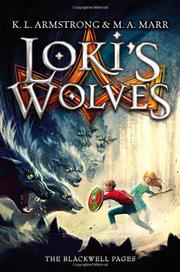 From the Blackwell Pages series, volume 1

by K.L. Armstrong ; M.A. Marr ; illustrated by Vivienne To

The apocalypse is coming, and only the gods can stop it. One problem—the gods are dead.

The gods of Norse myth might be dead, but their descendants live, and in Blackwell, S.D., most residents are descendants of either Thor or the trickster god Loki. When Ragnarök, the apocalypse, arrives, 13-year-old Matt Thorsen will be the champion of the gods. He is charged with finding descendants of other gods, forming an alliance and facing off against the monsters of the apocalypse. Unfortunately, the prophecy says that the champions of the gods and the monsters all must die if the world is to be reborn. The narration alternates among the three third-person voices of Matt, Fen, a descendant of Loki, and Laurie, his cousin. It is so methodically constructed that readers will welcome the action Ragnarök will offer. However, this volume is but the debut of a trilogy, and readers will have to await future volumes to tie the tale together. Since Norse myths are not as familiar to most kids as Greek and Roman tales, readers will probably want to check out the series’ website, which provides additional information (incomplete at time of review).

Norse mythology brought to life with engaging contemporary characters and future volumes that promise explosive action; ideal for Percy Jackson fans who want to branch out.