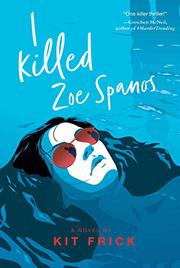 Seventeen-year-old Anna Cicconi finds herself in the middle of a mystery when she takes a summer nanny job in the swanky Hamptons enclave of Herron Hills.

Frick begins her story at the end. Well, sort of. August in the Hamptons signals the turning of the leaves and sees the grisly discovery of 19-year-old Zoe Spanos’ body. Zoe disappeared on New Year’s Eve, and Anna, who happens to strongly resemble her, has confessed to her murder. However, Martina Green, who runs the podcast Missing Zoe, doesn’t believe Anna did it and attempts to find out what really happened. Flash back to June: Hard-partying recent high school grad Anna sees her new job caring for Tom and Emilia Bellamy’s 8-year-old daughter as a fresh start. As one sun-drenched day melts into the next, Anna is drawn to Windemere, the neighboring Talbots’ looming, Gothic-style home, and to the brooding, mysterious Caden Talbot. But Anna can’t shake a feeling of déjà vu, and she’s having impossible memories that intertwine her life with Zoe’s. Frick easily juggles multiple narratives, and readers will enjoy connecting the dots of her cleverly plotted thriller inspired by Daphne du Maurier’s classic Rebecca. Anna and Zoe are white; the supporting cast includes biracial characters Martina (Latinx/white) and Caden (black/white). Caden discusses grappling with being raised by white adoptive parents, facing racialized suspicion as Zoe’s boyfriend, and feeling marginalized at Yale.

An atmospheric and creepy page-turner.