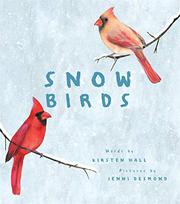 Rhyming couplets introduce birds one might see in spite of winter snows.

Hall describes behaviors that help 17 species survive cold winters. She begins and ends with the blue jays familiar to readers east of the Rockies: a pair that takes peanuts from a feeder to hide for later and then, in spring, builds a nest for a new generation. In between she introduces a broad range of birds, some residents and some with shorter seasonal migrations that end in parts of the U.S. that are cold and snowy. Carolina wrens, snow geese, black-capped chickadees, American tree sparrows, downy woodpeckers, and northern cardinals are birds whose winter ranges span much of the country; common redpolls, snow buntings, black rosy-finches, Atlantic puffins, Bohemian waxwings, ruffed grouse, great gray and snowy owls, and golden crowned kinglets frequent only small parts. Readers are quite unlikely to encounter an ivory gull stealing its winter food from polar bears! Desmond’s double-page spreads show the birds beautifully, and they include important details about their appearances, their usual numbers, and their environments. Predominantly done in muted tones with lots of black, white, and shades of gray, they have spots of color when appropriate. Where the bird’s sounds aren’t included in the poem, they’re worked into the images. Hall’s skillful poetry reads aloud well, making this a solid candidate for small-group storytime even where the birds—or even the snow—aren’t familiar. (This book was reviewed digitally with 10.5-by-18-inch double-page spreads viewed at 81.6% of actual size.)

An attractive addition to the nature shelf.