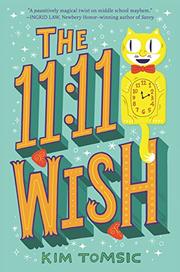 When advice from the How to Survive Middle School blog doesn’t work, mathlete Megan Meyers tries magic. But at what cost?

Moving to Arizona after her mother’s death and starting a new middle school is hard. Worse, friendly-seeming Ally and mean girl Rhena have put Megan in the middle of their rivalry and are pressuring her to create exciting events in the lead-up to spirit week. Desperate to fit in, Megan wishes on a magic cat clock, just like one her grandmother used to have, hanging on the classroom wall. First showstopper: a snowstorm! Megan should feel like the cat’s meow, but she’s coughing up hairballs! While Megan’s home life is referenced in healthy doses, the action is firmly centered on the drama at school. Megan is endearingly transparent. Readers will empathize with her tenuous position and her tenacity despite the hilarious situations she gets herself into. Recalculating the risks, Megan continues using magic to fix her predicament, only slowly realizing that her classmates, Ally included, genuinely like her as is. Rhena is the only problem, and in true Grimm’s fairy tale fashion, she gets her comeuppance. Some will find that a satisfying ending indeed. Even better is that Megan finds her voice and refuses to be manipulated anymore. The book adheres to a white default, with race and ethnicity cued by naming convention.