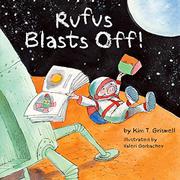 Ever since mastering literacy in Rufus Goes to School (2013), the titular pig has used his skills to find adventure. After convincing Capt. Wibblyshins to let him join a pirate crew in Rufus Goes to Sea (2015), his pirate mateys demand fresh new tales—but Rufus is all out! In search of stories, Rufus is determined to go boldly where no pig has gone before: Mars. There’s only one problem: Cmdr. Luna (a black woman) believes that pigs aren’t made of “the right stuff” because they are bound to “do loop-the-loops in the crew cabin” and “hog the juice packets.” Despite Luna’s bias, Rufus isn’t deterred: he’s been rejected before, but that’s never stopped him. After a few tries, he gets lucky: the Mars mission will be cancelled unless they can find someone to read a book on Mars, via livestream, to children around the world. Lucky for them, Rufus is the pig for the job! Quiet pen-and-ink illustrations show the pink pig in his element as he tumbles about, carrying his oversized books with him. While some readers new to Rufus may be puzzled at his jump from golden age piracy to futuristic space travel, fans of Rufus will be glad to see him triumph and will look forward to seeing where his next adventure will take him.

Those who love pigs, pirates, and planets are sure to be pleased.