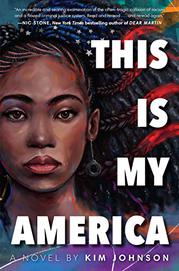 THIS IS MY AMERICA

Showcases one family’s persistent and courageous fight for freedom against a broken criminal justice system.

At the center of this story is Tracy Beaumont, a Black 17-year-old. Every week she’s been writing letters to Innocence X (think Innocence Project or the Equal Justice Initiative) on behalf of her father, who has been sentenced to death row in their home state of Texas, wrongfully accused of murder. There’s less than a year until it will be all over. Yet Tracy holds on deeply to hope that in her small-town neighborhood and across the U.S. people will recognize failures in justice. This is thrown into jeopardy when her older brother, Jamal, a local track star, is accused of killing a White girl. Could these two cases be connected? Tracy, an emerging journalist, has to wrestle with the present-day legacy of an overwhelmingly racist history, needing support not only from family, but also a strong legal team and, just maybe, a good cop, if there are any to be found. Johnson’s debut draws on her own experiences as an activist to offer a realistic depiction of reckoning with the complex and too-often-fatal issues that plague Black Americans today. Her belief in the power of social movements shines through, inciting a new generation of social change activists to be called into service of transformative change.

Harrowing and worthwhile; a call-to-action from the anti-racist insights of a generation of Black activists.