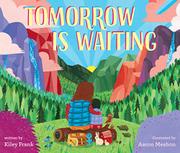 A lyrical message of perseverance and optimism.

The text uses direct address, which the title- and final-page illustrations suggest comes from an adult voice, to offer inspiration and encouragement. The opening spreads reads, “Tonight as you sleep, a new day stirs. / Each kiss good night is a wish for tomorrow,” as the accompanying art depicts a child with black hair and light skin asleep in a bed that’s fantastically situated in a stylized landscape of buildings, overpasses, and roadways. The effect is dreamlike, in contrast with the next illustration, of a child of color walking through a field and blowing dandelion fluff at sunrise. Until the last spread, each child depicted in a range of settings is solitary. Some visual metaphors falter in terms of credibility, as in the case of a white-appearing child using a wheelchair in an Antarctic ice cave strewn with obstacles, as the text reads “you’ll explore the world, only feeling lost in your imagination.” Others are oblique in attempted connections between text and art. How does a picture of a pale-skinned, black-haired child on a bridge in the rain evoke “first moments that will dance with you”? But the image of a child with pink skin and brown hair scaling a wall as text reads “there will be injustice that will challenge you, and it will surprise you how brave you can be” is clearer.