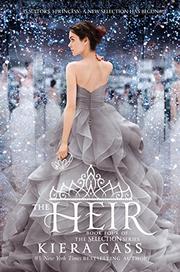 From the Selection series, volume 4

Cass’ bestselling Selection trilogy is now a series, with the fourth installment picking up 20 years after The One (2014).

Narrated by Eadlyn, the 18-year-old firstborn of King Maxon and Queen America and the next in line for the throne of Illéa, the tale perpetuates the same stiff dialogue and obvious premise of its predecessors, though there is a tiny twist to the latter. This time, it’s "The Bachelor meets The Hunger Games meets The Taming of the Shrew." Eadlyn is a practical princess, primarily concerned with preparing to one day rule the country. From the get-go, readers are bludgeoned with evidence that in her focus on leadership, she is too brusque and insensitive, both with the people closest to her and the wider national population. Her family makes the case that provincial unrest will be quelled if she would just stop being a ballbreaker, find a husband, and give the masses a distraction-cum-reason to love the monarchy again. “You can be brave and still be feminine…you can be queen and still be a bride,” her twin brother assures her. Thus is Eadlyn strong-armed into participating in a Selection of her own, and the broadly drawn novel is primarily concerned with setting up most of the contenders to be a 50-50 shot. After dispatching the low-hanging fruit, she winds up with a group of “loud, strange boys” who “all matter” to her.

The cliffhanger ending is merely an abrupt pause in the action—this chapter is essentially just scene-setting for the inevitable continuation(s).