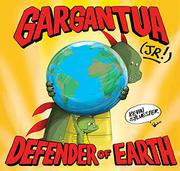 A little kaiju yearns to join its mom in saving Earth and other good deeds.

It seems the narrator’s mom at one time was “a little…wild” (“Where did you even find that?” she exclaims, rolling her eyes at a collection of clippings with headlines like “GARGANTUA STRIKES AGAIN”). But now she helps out by resetting knocked-over buildings, tickling rampaging space robots into acquiescence, and blasting the occasional giant asteroid before it hits with her fiery atomic breath. “I want to grow up to be just like my mom,” proclaims the cute little narrator—who chafes at being allowed to cheer her exploits only from a distance. The diminutive lizard-monster therefore determinedly sets out to prove that it’s not a baby any more. Fortunately, Mom comes through in the clutch. After saving her overly ambitious mite from being smooshed beneath the condemned skyscraper it manages to knock down, instead of meting out punishment she cannily suggests that maybe they should work together from then on. “And that’s just what we do,” the dinky dino concludes, adding a pint-sized blast to its mom’s roaring exhalation. Only carping critics will complain that Sylvester models his round-headed narrator and its smiling, much bigger single parent more on Godzilla and Godzilla Jr. than the Gargantua of film in his cartoon pictures. They are missing out on terrific fun.