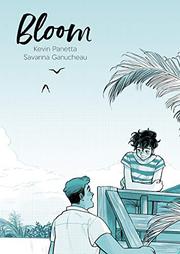 Summer love rises between two boys in a bakery.

High school may have ended, but Ari is stuck with sourdough starter at his family’s bakery instead of summer gigs in the city with his band. As his family’s money grows tighter, Ari feels tethered in place. His friends start to drift toward their own futures. But the future of their band—and their friendship—drifts toward uncertainty. Under the guise of recruiting another baker to take his place, Ari hires Hector. A culinary student in Birmingham, Hector has temporarily returned home to find closure after his Nana’s passing. The two grow close in more than just the kitchen. Ari, who hates baking, even starts to enjoy himself. But will it all last? Panetta and Ganucheau’s graphic novel debut is as much a love story between people as it is with the act of baking. Ganucheau’s art, in black ink with varying shades of blue, mixes traditional paneling with beautiful double-page spreads of detailed baking scenes, where the panels sometimes take on the shape of braided loaves. The romance between Ari and Hector builds slowly, focusing on cute interactions long before progressing to anything physical. Ari and his family are Greek. Family recipes referenced in the text code Hector as Samoan. Delicious.

A tender blend of sugary, buttery, and other complex flavors that’s baked with a tremendous dash of heart.