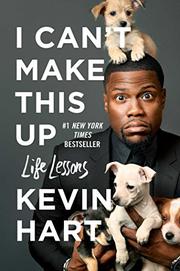 I CAN'T MAKE THIS UP

by Kevin Hart with Neil Strauss

The popular comedian debuts with “the stories behind the jokes, and a few lessons…about life, success, parenting, and relationships.”

In his first book, Hart spares little detail about his personal and profession life. He chronicles his childhood with an absent father and protective mother, his toxic first marriage, and his rise to fame, punctuating each section with a lesson. Growing up in Philadelphia, the author wasn’t sure what he wanted to do with his life. He watched his brother get kicked out of the house for selling drugs and being violent with his mother, experiences that reverberated through his teen years. His mother worked hard to give her children a decent life, and she kept Hart busy with after-school activities to make sure he was never alone to get into trouble like his brother. He assumed his mother’s work ethic and diligence, and when he found stand-up comedy, it consumed him. Unfortunately, while he was pursuing his dream, shuttling between Philadelphia and New York, his relationship with Torrei, his first love and first wife, suffered. Comedy nerds will love the details about the author’s climb up the ladder, and the sections on his adopted family at the Comedy Cellar and his relationship with fellow comedian Keith Robinson give great insight into the life of a comic who is constantly working to get better. There are some nasty personal details about Hart’s relationship with Torrei and how, according to him, it became mutually abusive, ever more so with the pressure of an advancing career and children. Some of the author’s lessons border on platitudes—e.g., believe in yourself, shrug off the bad stuff and move forward—and the tales about how he learned these things sometimes render the breakdowns at the ends of the sections unnecessary. But Hart is an incredibly magnetic storyteller, on the page as he is onstage, and that’s what shines through here.

The book could have been trimmed by about 50 pages, but Hart is a genial, entertaining guide to a life in comedy.