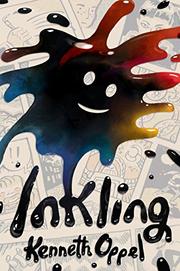 “No one was awake to see it happen.”

No one except Rickman, the cat, who was snooping around for something to eat. He saw the whole thing: The ink in Mr. Rylance’s sketchbook came to life, slithered across the page and lifted right out of the book, leaving no sign it had ever occupied the white paper. Ethan, Mr. Rylance’s son, hates drawing, but everyone thinks that because his dad is a famous graphic novel artist, Ethan has talent. The terrible truth is that he can’t draw, but his friends have designated him the artist for a school project. Then Ethan meets the splotch with a mind of its own and dubs it “Inkling.” Inkling has taught himself (Oppel genders Inkling male with pronoun use) to read and communicates by forming words on paper—and he can draw! But then Inkling goes missing. Has he been kidnapped? Did he run away? The third-person narrative follows Ethan, a classmate, and Inkling, neatly developing the inkblot into a memorable character in his own right. In a metafictive touch, the corners of the pages are themselves splotched, giving readers the feeling that they’re part of the story. Ethan’s 9-year-old sister has Down syndrome but isn’t a sentimental plot device; she adds an extra layer of true humor and warmth to the story. The characters all present white in Smith’s vignettes.

A sweet and funny story about an unusual friendship.