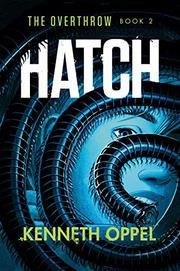 From the Overthrow series, volume 2

In this sequel to Bloom (2020), half-alien/half-human teenagers Anaya, Petra, and Seth continue to fight an alien invasion while grappling with their own rapidly changing bodies.

After helping discover an herbicide that delayed the aliens’ initial attempt at colonization—seeding the Earth with deadly plant life—the three friends shelter on Deadman’s Island with Anaya’s and Petra’s parents and Dr. Weber, a scientist who becomes their ally and offers to be parentless Seth’s foster mother. The teens feel safe until Col. Pearson, the head of operations on the island, discovers their secret: that Seth has feathers, Anaya has claws, and Petra has a tail, all as a result of the alien DNA they hadn’t known they were carrying until the Earth became covered in intergalactic flora. Pearson sends the teens to a military base housing 23 other young people with alien DNA. The three are relieved to meet others like them—until they realize that the scientist running the facility has nefarious plans to study them. As the teens’ bodies transform, so do their loyalties: Should they help earthlings, who are mistreating them, or the aliens who gave them their special powers? The book’s character arcs are nuanced and believable and the prose, gorgeously rendered. Oppel’s chillingly beautiful, detailed world is the perfect backdrop to the action-packed plot. Unfortunately, the human characters largely lack any kind of diversity.