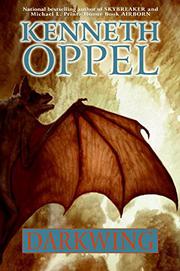 Dusk is a misfit in his colony, a freak. He has only two claws instead of three, weak legs, unusually strong chest and shoulder muscles and the ability to see in the dark. And where other chiropters glide, he has the urge to flap his sails. He is a pre-bat, perched on a new branch of evolution. In the age when the saurians are dying out and mammals are on the rise, Dusk is a new kind of animal, and his is the story of the misfit finding the courage to spread his wings and fly. When his colony is attacked by a prowl of rogue felids led by the evil Carnassial, Dusk uses his skills to lead the survivors to a new homeland, with many adventures along the way. Rich sensory details bring to life the Paleocene epoch of 65 million years ago—the steamy heat, heady fragrances, giant sequoias and vast grasslands. Lively prose and sheer imagination make Oppel’s fourth bat story another winner. (author’s note) (Fiction. 9+)