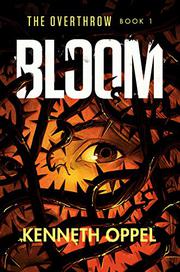 From the Overthrow series, volume 1

When a worldwide rain results in alien plant life taking over the Earth, three Canadian teens are the only ones strong enough to resist the invasion.

Anaya, Seth, and Petra have always felt different from their peers on their British Columbia island. Anaya has severe allergies that give her acne and perpetual congestion. Seth is a foster child with scars running up and down his arms. Although pretty and popular, Petra is allergic to water. None of the teens think much about the others until strange black plants begin sprouting all over town after a day of heavy rain—that somehow doesn’t trigger Petra’s water allergy. When the plants turn carnivorous, Petra, Anaya, and Seth are the only ones able to withstand their strange perfumes and their acidic interiors, and they realize they must have something more in common. And then Anaya’s botanist father reveals that the plants came from another planet—and they are in the process of colonizing the Earth. In this fast-paced thriller, Oppel spins a richly drawn, incredibly fascinating world. Beginning with the brilliantly unique premise of a botanical alien invasion, the plot unravels satisfyingly, building readers’ curiosity by creating 10 new questions for every answer given. The book’s one significant weakness is its lack of diversity. Other than Anaya, whose name implies she might be South Asian, the other characters present white.

A thrilling alien-invasion novel based on a chillingly nefarious premise.