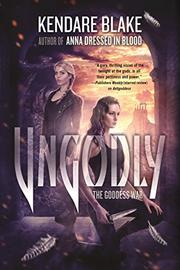 From the Goddess War series, volume 3

It isn’t tidy, but everything resolves in this final act for the Greek gods, led by Athena with help from Hermes, Calypso, Ares, and Aphrodite, who are all dying of maladies appropriate to their individual natures. Heroic mortals Cassandra, Hector, Odysseus, and Andromache have been reincarnated as modern teenagers—all of whom Achilles is bent on destroying, as are other enemies. In Mortal Gods (2014), the group broke up when they attacked Olympus. Now three small groups travel independently, still trying to find the cause of their imminent mortality. With help from Thanatos, the god of death, they finally discover who is behind it all. Like Rick Riordan before her, Blake has clearly had a good time modernizing the gods and heroes, but the difficulty in the imaginative series lies in the too-large cast. Given mostly equal weight, the characters banter and quip their ways through their adventures, each speaking in much the same modern and rather cynical voice. While readers can care about them, especially Athena and Hermes, the cast is simply too numerous and the threat, too abstract for a strong focus. Still, readers can enjoy the journey and the hip dialogue, punctuated by a few brief fights.

Nevertheless, it’s an above-average addition to the updated-mythology genre and a satisfying conclusion for the series’ fans.