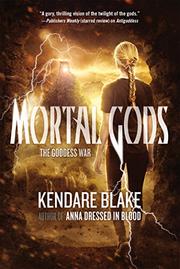 From the Goddess War series, volume 2

This second installment of the Goddess War series continues the modern-day battles originally fought centuries ago, pitting god against god even as all of the Olympians appear to be dying.

Athena, at the center of the rebel faction, still fights off the owl feathers that sprout in her lungs, constantly threatening to choke her. She remains teamed up with her brother Hermes, who’s wasting away from a too-high metabolism, and mortal characters from Troy now reincarnated as teenagers. Athena sees Cassandra, who can kill gods with her touch, as one of the two major weapons she has against the other divine faction, which primarily comprises Aphrodite, Ares and Hera, thought killed in the first book but found still living. Athena and Odysseus travel to find Achilles, Athena’s second weapon. Athena’s errands and an interesting side trip into Hades add action, but much of the book churns with constant repartee among the characters, their suspicions of one another and their constant training bouts. The prose, both narrative and dialogue, is characteristically witty, but there’s an undeniable feel of second-volume sag to the story. When readers finally reach Olympia for a final battle, the suspense picks up. The underlying concept that finds dying gods at war with one another is still intriguing, but readers may become impatient for more back story.

The series still intrigues, but it needs tightening.