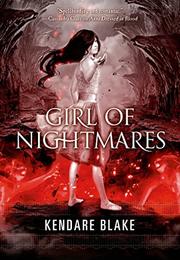 A satisfying conclusion to ghostly Anna’s terrifying story comes with more heart-thumping suspense and clever quips as Cas tries to save her from an undeserved, dreadful fate.

In the outstanding Anna Dressed in Blood (2011), the ghost, Anna, saved Cas, the ghost-killer, by dragging the voodoo monster, Obeahman, down into Hell. Now she’s back, asking Cas to rescue her, and he’s determined to do it despite all advice to the contrary. This sequel takes Cas and his friends to Britain and a secret cult that wants Cas’ athame, the magical knife that kills ghosts. There he meets Jestine, who believes she should be the next athame warrior, although unlike Cas, she wants to kill ghosts whether or not they’re dangerous to humans. She joins Cas for the final showdown against the Obeahman, who ate both Cas’ cat and his father and now holds Anna hostage. Blake provides enough background explanation to bring new readers into the story, but for full appreciation, readers should start with book one. This new author has a serious talent for action but also for delicious dry humor (“I’ve sort of been slacking off in my voodoo studies. I’ve got trigonometry, you know?”). The exciting conclusion leaves the coast clear for a whole series starring Cas or for something entirely different, whatever the author wishes. Either way, Stephen King ought to start looking over his shoulder.