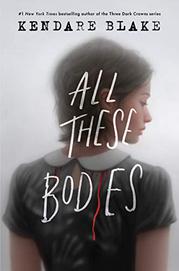 A “nobody from nowhere” gets the scoop of a lifetime.

A paperboy and aspiring journalist in 1959 Black Deer Falls, Minnesota, 17-year-old Michael Jensen’s heard about the previous summer’s killings known as the Bloodless Murders or Dracula Murders. The body count so far is 12 blood-drained corpses found across the Midwest. Then blood-drenched 15-year-old Marie Catherine Hale is discovered at the scene of the Carlson triple homicide in Michael’s hometown. Ultimately unknowable Marie—cast as something of a femme fatale in contrast to Michael’s bland, Everyman foil—doesn’t deny her involvement but won’t identify her much-mythologized accomplice. Infuriating an ambitious district attorney, the police, and national news reporters, Marie chooses to tell her slippery, shifting, and allegedly supernatural story solely to Michael. More of a sympathetic confessor than a callous interrogator, Michael works to tease out Marie’s motives even as his community and the world question his entanglement with the case. Although she inserts a supernatural element, Blake otherwise grounds the true-crime–style tale—which acknowledges the influence of Truman Capote’s In Cold Blood—in real-life issues like domestic abuse, poverty, privilege, and sexism. Paradoxically, even as the book scrutinizes the darker human appetite for serial killers, criminal escapades, and vengeance, it caters to these same urges. The enigmatic ending might leave readers without resolution, but like Marie’s “truths,” the full story may never be known. Main characters read as White by default.

An insightful look at our morbid curiosity about murderers.