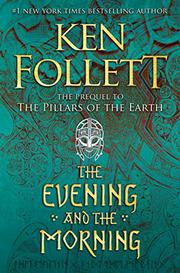 THE EVENING AND THE MORNING

Murder, sex, and unholy ambition threaten to overwhelm the glimmers of light in Dark Ages England in this prequel to The Pillars of the Earth (1989).

A Viking raid in 997 C.E. kills Edgar’s one true love, Sungifu, and he vows never to love another—but come on, he’s only 18. The young man is a talented builder who has strong personal values. Weighing the consequences of helping a slave escape, he muses, “Perhaps there were principles more important than the rule of law.” Meanwhile, Lady Ragna is a beautiful French noblewoman who comes to Shiring, marries the local ealdorman, Wilwulf, and starts a family. Much of the action takes place in Dreng’s Ferry, a tiny hamlet with “half a dozen houses and a church.” Dreng is a venal, vicious ferryman who hurls his slave’s newborn child into a river and is only one of several characters whose death readers will eagerly root for. Bishop Wynstan lusts to become an archbishop and will crush anyone who stands in his way. He clashes with Ragna as she announces she is lord of the Vale of Outhen. “Wait!” he says to the people, “Are you going to be ruled by a mere woman?” (Wynstan’s fate is delicious.) Aldred is a kindly monk who harbors an unrequited love for Edgar, who in turn loves Ragna but knows it’s hopeless: Although widowed after Wilwulf’s sudden death, she remains above Edgar’s station. There are plenty of other colorful people in this richly told, complex story: slaves, rapists, fornicators, nobles, murderers, kind and decent people, and men of the cloth with “Whore’s Leprosy.” The plot at its core, though, is boy meets girl—OK, Edgar meets Ragna—and a whole lot of trouble stands in the way of their happiness. They are attractive and sympathetic protagonists, and more’s the pity they’re stuck in the 11th century. Readers may guess the ending well before Page 900—yes, it’s that long—but Follett is a powerful storyteller who will hold their attention anyway.

Follett's fans will enjoy this jaunt through the days before England was merry.