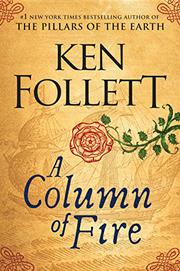 A COLUMN OF FIRE

A flying buttress of a book, continuing the hefty Kingsbridge saga historical novelist Follett began with Pillars of the Earth (1989) and World Without End (2007).

It’s not that Follett’s been slacking between books: he’s been working away at the Century Trilogy, set centuries later, and otherwise building on the legacy of high-minded potboilers he began with Eye of the Needle (1978). Here he delivers with a vengeance, with his Kingsbridge story, set in the shadow of a great provincial cathedral, now brought into the age of Elizabeth. Ned Willard, returning from the Continent on a boatload of “cloth from Antwerp and wine from Bordeaux,” beats a hasty path through the snow and gloom to the lissome lass he’s sweet on, Margery Fitzgerald. Her mom and dad are well-connected and powerful—but, alas, Catholic, not the best choice of beliefs in an age when Tudor Protestantism is taking a vengeful turn and heads are rolling. Rollo, Margery’s brother, turns out to offer good cause for suspicion; having twitted and tormented Ned over the course of the story, he’s sailing with the Spanish by the end. But will Ned keep his head and Margery hers? Or, as Margery wonders lamentingly, “Had Ned caught Rollo, or not? Would the ceremony go ahead? Would Ned be there? Would they all die?” Ah, it is but to wonder. Follett guides his long, overstuffed story leisurely through the halls of Elizabethan history; here Bess herself turns up, while there he parades the likes of Walsingham, Francis Drake, and the whole of the Spanish Armada, even as Margery yearns, the tall masts burn, and Follett’s characters churn out suspect ethnography: “Netherlanders did not seem to care much about titles, and they liked money.”

It’s all a bit overwrought for what is, after all, a boy-loves-girl, boy-swashbuckles-to-win-girl yarn, but it’s competently done. Follett's fans will know what to expect—and they won’t be disappointed.