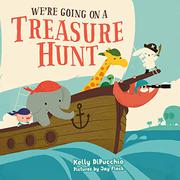 WE'RE GOING ON A TREASURE HUNT

Forget the bears. Treasure’s the name of the game in this reimagining of a storytime staple.

Replicating the rhythms from “We’re Going on a Bear Hunt” and substituting swashbuckler speak, the narrative sends six intrepid (not to mention adorable) animal crewmates forth for gold and glory. “We’re goin’ on a treasure hunt. / We’re gonna fetch some gold! / YO-HO-HO! / Me hearties, let’s go!” No true journey can exist without peril, and so the adventurers must face down a giant squid, “wicked whales,” a hurricane, massive waves, and fighting skeletons. It’s all worth it in the end, until they face most fearsome beastie yet: a mouse. Multiple readings will yield a comfortable telling, as there can be a bit of visual confusion (the mouse is so small when it appears that readers could be forgiven for missing it initially). Allowing for plenty of interactive hand motions and audience participation, this is custom-made for pirate-themed storytimes for all ages. Fleck takes great pains to render the scary moments soft and cuddly and even pops in delightful details, such as how exactly a pirate sloth would get about (answer: slowly). The pirate bunny uses a peg leg, and the pirate turtle wears an eye patch.

Arr-propriate for multiple rereadings and more fun than a bottle of rum! (Picture book. 3-6)