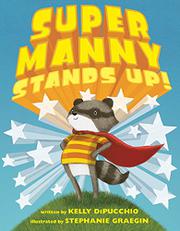 This charming story marries the mania for superheroes with a potent anti-bullying message, making it an apt tale for present times.

Super Manny, an imaginative raccoon child, after school regularly dons capes of various colors to battle everything from “an angry army of zombie bears” to “legions of alien robots with laser-beam eyes.” During school he sports an invisible cape that allows him to continue his victorious voyage through his world incognito. Throughout, he declares out loud to the world his own fearlessness and strength in words that children will want to echo. But his courage is tested when Tall One, a lunchroom bully, threatens Small One. Although Manny initially freezes, he remembers his superhero status and his invisible cape and commands the bully to stop. This startles the whole lunchroom of animal kids into recalling their own capes of courage, and they all collectively stand up for Small One, making Tall One beat a hasty retreat. The whimsical illustrations and antics of imaginative Manny (and his new porcupine friend, Small One) will delight children and their grown-ups even as they take in the playfully delivered yet deeply felt message of the importance of standing up for others. Speech balloons vary in size according to the confidence level of the speakers—a highly effective visual.

With great read-aloud potential, this story could be used by both parents and teachers to introduce concepts of courage and standing up to bullies from the youngest preschoolers up