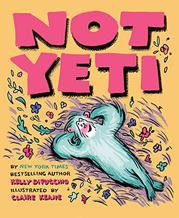 This may not be the best picture book for Billy Joel or John Milton.

Milton was accused of belonging to the devil’s party because Satan gets all the best scenes in Paradise Lost. Joel has famously sung that “Only the Good Die Young.” But the goody-two-shoes yeti in this story is much more fun than all the other monsters. Yeti “crochets sweaters for penguins,” the text informs readers. He cheers on newborn sea turtles as they’re scuttling toward the ocean. He tells knock-knock jokes to the trees (“Yew who?”). The nastier monsters kick sand and TP the babysitter, which isn’t terribly original. Even when Yeti brings them warm banana bread, they’re inclined to stuff it up their nostrils. OK, that does look fun, if not very tasty. Yeti’s community service is so entertaining that the jokes in the text feel almost redundant, which is good, because they’re very low-key. When Yeti is described as “abominable,” the reference is so subtle that some readers may not get it till their second or third trip through the book. The pictures are also low-key, in the sense that the monsters come in pastel colors. They look almost dashed-off, but the character designs are imaginative enough that one monster has 16 ears. (This book was reviewed digitally with 11-by-18-inch double-page spreads viewed at 80.8% of actual size.)

This story makes “Virtue is its own reward” seem original and kind of a blast.