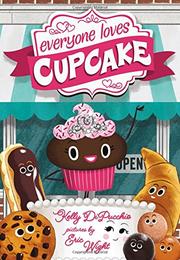 A sweet follow-up to DiPucchio and Wight’s Everyone Loves Bacon (2015).

As in its predecessor, humorous, food-based wordplay abounds in the clever text about beloved, anthropomorphic Cupcake in her cafe community. After the opening, titular line, word-balloon text affirms Coffee’s love for Cupcake (“A latte!”) and (wedding) Cake’s, too (“I do”). Throughout, Wight’s illustrations augment the humor with clever touches such as the latte-art heart on Coffee’s surface. Meanwhile, Brownie is “nuts about her,” and Angel Food Cake loves everyone. But the Tarts are jealous. Their snide comments sting, especially because general insecurity is Cupcake’s bugaboo: “Cupcake worried a lot about what everyone thought, so she worked extra hard at being extra perfect.” Alas, her striving and declarations of effort eventually grate on the others, who begin to avoid her. Feeling “crummy,” Cupcake finds inspiration in words from, who else, (fortune) Cookie: “Be true. BE YOU.” But when Cupcake musters up the courage to voice her true feelings, the revelations (that her frosting is artificially colored and she hates birthday parties) don’t really connect to earlier parts of the story. Of course she’d hate birthday parties…where she’d be eaten, right? Forgoing frosting or sprinkles altogether would be more in tune with the anti-perfectionist message. While the climax thus seems incongruous, other treats’ revelations reinforce the humor of the text, and the conclusion is supersweet.