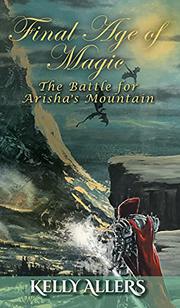 THE BATTLE FOR ARISHA'S MOUNTAIN

From the Final Age Of Magic series

An alchemist and a warrior cross paths as dark forces assemble in this fantasy series opener.

Kaden Raylon is an alchemist in the kingdom of Avian. For years he’s suffered nightmares in which he dies and “an army of darkness covered the Kingdoms of Earth.” After studying in the city of Natreon, he returns home to Splendour for the Harvest Moon Festival. There, he dreads the future despite the love of his cheerful betrothed, Arika Angelika. A reptilian fortuneteller named Ceru even tells him that he has “no future” but also that he “must find a way to break” a mysterious seal to dispel darkness. Meanwhile, in the city of Drake, Tzak is the latest Dragoon, or warrior king. As night falls on a celebration in his honor, he retires to the forest with a female companion. In the morning, he finds Drake and its inhabitants burned to cinders. He encounters nobody living but Master Drogon, who explains that Tzak is cursed because his trials to become the Dragoon are incomplete. Tzak must spill the tainted blood of his last living half brother. Elsewhere, at the nesting grounds of Murder Grove, the birds of Avian prepare to answer a call to war by Arisha, “our Goddess of Love.” Allers begins this rousing epic fantasy series with magical multispecies chaos. Aside from powerful humans, Avian is home to talking birds, like Rey, the “conure parrot,” and Melody Tron, the angel-like Seraph. Early on, Arika says, “a person will always need others to give them purpose and identity,” pointing readers toward a key plot driver. Tzak is an intriguing, tragic figure, attempting to live on a pedestal and going badly astray in the process. The author’s battles are incredibly cinematic, as when “the ice dragon was flying with broken wings...spraying the trees with blood...it looked like a demon from another world.” Kaden undergoes a surprising change in the final third that gives him a new mission and proves that Allers is conceptually daring. A rewarding new dimension awaits readers in the sequel.

A consistently surprising fantasy with strong characters who enhance the story.