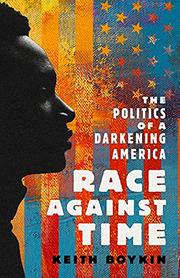 The Politics of a Darkening America

Prominent journalist and author Boykin, co-founder of the National Black Justice Coalition, looks deeply into our dangerous era and the unraveling social order by which Whites feel threatened by Black progress.

Four “cataclysmic crises” have faced America in the recent past: the pandemic, the ensuing economic shutdown, the emergence of a formidable racial justice movement, and the crisis of democracy produced by the Trump administration and its retrograde supporters. All four crises came together, Boykin writes in a spot-on analysis, in the murder of George Floyd, who was found by autopsy to have been infected with Covid-19, had been laid off when the restaurant in which he worked closed, and was inarguably a victim of a racist regime led by a president motivated by “a repudiation and attempted erasure of the nation’s first Black president.” Floyd’s death, writes the author, “would provide the pretext for the president to instigate a new crisis of democracy,” one that led to widespread efforts on the part of the police to suppress dissent—at least on the left, since no such effort was made to suppress the disaffected Whites who stormed the Capitol on Jan. 6, 2021. Trump was despicable, but Bill Clinton, in some ways his moral opposite and in others a kindred spirit, wasn’t much of a prize, either. In Boykin’s view, his assault on the rapper Sister Souljah was unquestionably racist. “For the vast majority of Black people at the time, Clinton…was the best we thought we could do under the circumstances,” he writes. “Reexamining the Clinton administration some decades later, it seems we were wrong.” What remains to be done, Boykin suggests, is to surmount the four crises and force White constituencies at last to recognize that “ignoring the pleas of Black and brown voices” is a threat to the social structure that can no longer be tolerated.

A troubling, provocative book that raises essential questions about our path forward.