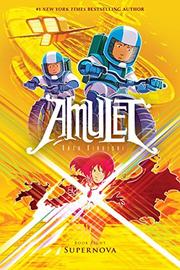 From the Amulet series, volume 8

Stonekeeper Emily frees the elves from their monstrous masked ruler and sets out to rejoin her brother and mother in the series’ penultimate episode.

The multistranded storyline picks up with Emily’s return to the world of Alledia. Now a fiery, destructive phoenix struggling to regain control of her actions, Emily goes on to follow her brother Navin and allies as they battle invading shadows on the nearby world of Typhon, then switches back to human form for a climactic confrontation with the Elf King—in the course of which Emily rips off his mask to a chorus of “ERGH!! NO!!! GRAH! RRGH!! AAAGH!” to expose a rousingly hideous face. Cute animal heads on many figures (the result of a curse) and a scene with benevolent-looking trees provide at least a bit of relief from the grim expressions that all the human and humanoid elven characters almost invariably wear. But along with emphatic sound effects, the battle and action scenes in the cleanly drawn, if sometimes cramped, panels feature huge blasts of fire or energy, intricately detailed giant robots, weirdly eyeless monsters, and wild escapades aplenty to keep the pace’s pedal to the metal. Aliens and AIs in the cast come in a variety of hues, elves are a uniform gray, and except for a brief encounter between Emily and a slightly darker lad, the (uncursed) humans default to white.

Kibuishi gives his epic tale a hefty nudge toward its long-building climax while giving readers plenty of reasons to stick around for it.