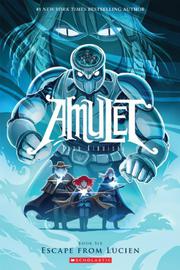 From the Amulet series, volume 6

Wraithlike attackers force a mass evacuation and a cryptic prophecy’s meaning begins to clear in this headlong continuation of Kibuishi’s deservedly popular series.

The action picks up in midflight as Navin and companions survive the destruction of their giant robot suits, then help the fleeing survivors of the city of Lucien by fighting a rear-guard action against swarms of diaphanous, cat-eyed, zombie-making Dark Scouts. Meanwhile Emily, Trellis and Vigo reluctantly join traitorous elf Max Griffin in another visit to the Voice’s realm of memories that leads to the death of a major character—along with a rescue, reunions with old friends and a lead-in to the next episode. Though the ongoing plotlines and large cast make familiarity with earlier outings a necessity, this one still features a crowd-pleasing blend of lively dialogue (“And I don’t care what the prophecies say. You’re still a slacker”), easy-to-follow, nonstop action, elves, robots and derring-do amid awesome sound effects (“D-DOOOM SHHAAAAAA,” “SZRAK!”). Most of the cleanly drawn, lushly backgrounded panels focus on faces, with occasional full-spread scenes adding dramatic visual highlights.

A page-turner that gives the heroic Stonekeepers plenty of chances to show their stuff and moves the main story along an inch or two.