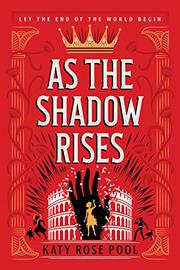 AS THE SHADOW RISES

From the Age of Darkness series, volume 2

Five characters face a prophesied Age of Darkness in this epic fantasy sequel.

As the world starts to crumble under a dangerous cult whose political power increases as they persecute the magical Graced, the final pieces of the last prophecy finally align: Gambler Anton, the Last Prophet, has finally been revealed, and together with warrior Jude, the Keeper of the Word and Anton’s protector, he must follow the path set by his visions in order to stop the world ending. Meanwhile, Prince Hassan—the Deceiver—risks everything he holds dear in order to regain his throne just as Ephyra, the ruthless assassin known as the Pale Hand, grows increasingly dangerous as she searches for Eleazar’s Chalice, the relic that will save her revenant sister, Beru, who just may be the last harbinger herself. Adventurous relic-hunting, mind-blowing twists, budding love, and terrible betrayals feature in this multiple-narrator, character-driven study of power, agency, and identity and the ways these are affected by the interwoven threads of both history and legend. The promised rising darkness sees its characters facing their inner turmoil in preparation for their roles in the impending apocalypse, often making poor decisions and skirting the line (and, in at least one case, fully crossing it) between villainy and heroism in a story with plenty of empowered brown and queer characters.

A strong sequel that deftly avoids middle-book syndrome and sets the stage for a promising finale.