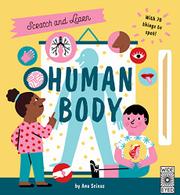 From the Scratch and Learn series

A very simple guide to (some) human anatomy, with scratch-off patches.

On sturdy board pages two cartoon children—one brown, one a sunburned pink—pose for cutaway views of select anatomical features. In most images certain parts, such as lungs and bladder on the “Organs” spread and both gluteus maximi on “Muscles,” are hidden beneath a black layer that can be removed with the flat end (or more slowly with the pointed one) of a wooden stylus housed in an attached bubble pack. With notable lack of consistency, the names of select organs or areas, with such child-centric additions as “A cut,” or “Poop,” are gathered in bulleted lists and/or placed as labels for arbitrarily chosen items in the pictures. It’s hard to envision younger readers getting more than momentary satisfaction from this, as they industriously scrape away and are invited to learn terms such as “Alveoli” and “Latissimus dorsi” that are, at best, minimally defined or described. Older ones in search of at least marginally systematic versions of the skeletal, sensory, nervous, and other (but not reproductive) systems will be even less satisfied. Even those alive to the extracurricular possibilities of a volume that contains, as one of the two warnings on the rear cover notes, a “functional sharp point,” will be disappointed.

There may be an audience for this—but not in any library, classroom, group, or, particularly considering the pointy piece, preschool setting.