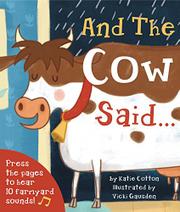 AND THE COW SAID

One uninvited animal guest after another drives a farmer out of his house in this noisy nighttime romp.

Poor Farmer Bill is just about to go to bed on a rainy night when there’s a knock at the door. “He opened it up, and a head peeked through. / It was a cow, and the cow said…MOO!” The cow is only the first in a line of livestock that troops in, one at a time, or lurks in wait outside to bleat, squeak, bark, or utter some other characteristic call at the (firm) press of a white spot on each animal’s body. The chip embedded in the rear cover having no fewer than 10 separate sounds programmed in, Farmer Bill finds no rest—not even up on the roof, where a rooster waits to “bellow” its morning greeting as the sun comes up on a climactic animal chorus. The noises are more familiar (and less gross) than in the similarly polyphonic Ten Monsters in the Bed (2015), which some at least may see as a good thing, but on the final page the contact spots are both unmarked and mostly not located where the animals are. Hearing the farm creatures sound off again will require pressing at random and hoping for a result. On the other hand, the chip’s battery is replaceable, so this is less ephemeral than others of its sort.

Interactive fun, on a certain elemental level—but there are apps aplenty with more and better noises as well as animation to go along with the audio.