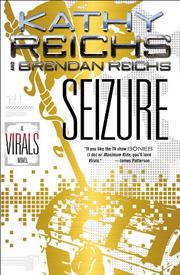 From the Virals series, volume 2

Tory Brennan, 14, and her friends are still trying to determine exactly what happened to them following the events of the series opener (Virals, 2010).

The teens have been exposed to an experimental virus that altered their DNA, giving them characteristics comparable to wolves, enhancing their natural senses and creating a human pack. Hardly has this novel started when her father, Kit, drops a bomb. Due to the economy, funding has been pulled on his research project, necessitating a change of job and a move away from South Carolina and her pack mates—but not before she debuts into Charleston society, at her father's girlfriend's insistence. Determined to stay together, Tory, Ben, Hi and Shelton band together to search for the long-lost treasure of America’s most famous female pirate, Anne Bonny. It’s not long before things go awry, and they learn that they aren’t the only ones on the hunt. They’re going to need all their abilities just to survive. Dodging bullets, slipping out after curfew, following obscure clues into underground tunnels, not to mention Cotillion duties and snarky classmates, are just part of the adventure. Will this be their last? Reichs taps into the angst of teens, fear of separation and the uncertainty of today’s economy and wraps it all in an entertaining yarn of history, pirates and modern technology.

These characters are keepers.