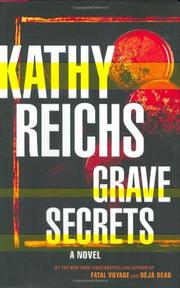 Invited to Guatemala to examine the remains of rural Mayan villagers executed over 20 years ago, forensic anthropologist Temperance Brennan doesn’t know that her reconstruction of the brutal annihilation of Chupan Ya is only the prelude to a series of escalating horrors. First, Tempe’s colleague Molly Carraway and her driver are ambushed on an isolated road; then Tempe is asked to analyze a grisly discovery made in the septic tank belonging to a little hotel in Guatemala City. Four young women, including Chantale Specter, the headstrong daughter of the Canadian ambassador, have gone missing from the capital over the past six months, and the corpse in the tank may provide evidence of a possible serial killer or consolation to the ambassador and his wife. But no sooner is Tempe ordered by her boss back in Québec to undertake an examination than she’s stonewalled by the very local authorities who’d asked for her participation. Nor does her brief time with the corpse yield any clues to the murderer’s identity; the most remarkable findings, in fact, concern a telltale cat hair. A trip back to her home base in Québec will provide some answers at the expense of raising others, and the range of felons and felonies will broaden with every gruesome discovery. Even Tempe’s off-again romance with high-handed cop Andrew Ryan will be shaken by a new pursuer, Guatemala City Sgt. Bartolomé Galiano, Ryan’s old schoolmate.

The impossibly busy plot, linking every felony in the Western Hemisphere over a generation, clogs Tempe’s fifth (Fatal Voyage, 2001, etc.) as badly as that septic tank.