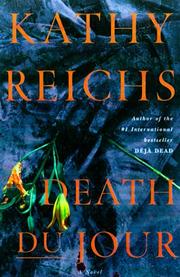 Called from her peaceful exhumation of the century-old bones of Sister Elisabeth Nicolet, whose heroic work during Quebec’s 1885 smallpox epidemic may qualify her for sainthood, consulting anthropologist Temperance Brennan finds herself in a charnel house. The two bodies that have been discovered in a burning house in St-Jovite were both murdered, one horribly, before the fire was set, and four more corpses, two of them infants, are found nearby. This tableau, showing Reichs’s strength in the gruesome details of forensics, is only Act One of a tale that will involve Tempe with a student missing from McGill University, a threateningly oracular professor of religious studies, and Tempe’s own flamboyant sister, Harriet Lamour. When the grisly discoveries Tempe’s made in the lab link the dead of St-Jovite to Dominick Owens’s commune in sleepy Beaufort, South Carolina, the site of two other killings, the evidence shrieks conspiracy, and the prose shrieks along with it: chapters end with the likes of Tempe’s —trepidation escalat[ing] to real fear,— —an icy wind rocketing through my soul,— and —my jaw dropp[ing] in amazement.— Beneath all the hand-wringing, readers with strong stomachs will find an even broader canvas than DÇjÖ Dead (1997), Reichs’s striking debut, though one with more mystification than mystery. Reichs plots ambitiously, knows her way around a morgue, isn’t afraid to pile on the Grand Guignol, and spins a tale that reads, well, like a house afire. (Author tour)