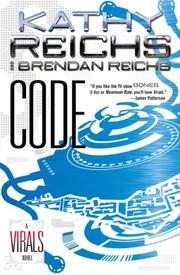 From the Virals series, volume 3

In this third Virals thriller, the focus is on Tory Brennan (niece of Temperance Brennan, hero of Reichs’ Bones books for adults) and her friends as they continue to explore their special wolf powers, acquired by accident but growing stronger every day.

Tory would like nothing better than to spend time with her friends prowling the barrier islands of Charleston, S.C. It’s too bad her dad’s irritating, socially conscious girlfriend insists on having Tory make her debut at this year’s cotillion, an event that holds no interest for this 14-year-old tomboy. Escaping to participate in a new game with her friends seems like a lark, as they uncover their first cache in what appears to be a treasure hunt. But things turn serious when each successive discovered cache turns more and more dangerous, putting not just Tory and her friends at risk, but their families as well. It’s a race against time to find the self-proclaimed Gamemaster and put a stop to this deadly game before an oncoming hurricane strikes Charleston, wiping out his tracks forever and setting him free to play his fatal game again…and again. More than just a Bones Jr., more than just an exploration of heightened natural abilities, this series mixes thrills with timeless coming-of-age themes, teasing the intellect with well-drawn characters and keeping the pages turning with a well-tuned pace.