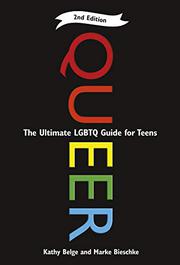 The Ultimate LGBTQ Guide for Teens

Two older gays try to appeal to kids these days.

Beginning with “Am I Queer?” and ending with sex, Belge (co-author: Lipstick's and Dipstick's Essential Guide to Lesbian Relationships, 2007) and Bieschke (contributor: Dear Teen Me, 2012) broadly cover important issues in the lives of LGBTQ people, with sidebars about their own personal stories as well as a series of “On the Queer Frontier,” covering historical figures like Sappho and Harvey Milk. Some information is specifically relevant to young people, such as First Amendment rights in schools, but much of it is easily applicable to people coming out at any point in their lives. In fact, at times this book feels more appropriate for a less savvy, pre-internet generation of young queers, especially in the ways it treats asexuality and nonbinary identities as asides, the use of language that reinforces a gender binary, and an oversimplified treatment of bisexuality. The final chapter on sex is particularly conservative, making queer sex sound extremely boring and with some fairly judgmental language about STIs to boot. Similarly, the chapter on relationships argues that queer relationships are as varied as those of straight people but doesn’t go into any of the interesting relationship structures present in, or pioneered by, queer communities. There are some necessary updates in this text that distinguish it from the variety of gay guidebooks published from the ’90s onward, but it’s still quite basic.