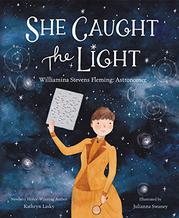 SHE CAUGHT THE LIGHT

Poetic, accessible text combines with intricate, appealing illustrations to portray Williamina Stevens Fleming (1857-1911), talented astronomer, resilient and highly intelligent individual, and the first woman given an official title (curator of astronomical photographs) at Harvard University. Her early years are gracefully depicted (her exposure to the magic of chemistry and light via her photographer father; her job teaching at age 14 after his death; how she left Dundee, Scotland, in order to marry and move to Cambridge, Massachusetts), leading up to her husband’s disappearance and her path to astronomy. Alone and expecting a child, she secured a job as a maid in the home of the director of the Harvard College Observatory, where she asked questions, absorbed information, and was eventually hired to study and calculate the colors produced by stars and recorded by the observatory. Her discoveries and her love of astronomy rise to the surface and will inspire an interest in young readers and listeners while the struggles and inequities she faced—raising a child alone, subsisting on low wages, not being allowed to use a telescope out of spurious concern for her health—show the difficulties she dealt with as a woman of the time and how she paved the way for others. Swaney’s delicate cartoons depict Fleming in Edwardian garb, a White woman amid an almost all-White cast. (This book was reviewed digitally with 11-by-18-inch double-page spreads viewed at 57.4% of actual size.)

Both an intriguing introduction to astronomy and an involving tale of a strong woman who overcame adversity.