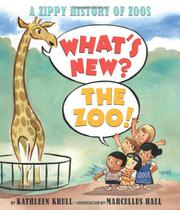 A Zippy History of Zoos

For at least 4,400 years, people have collected and displayed animals for entertainment, education and enlightenment.

From the long-ago kingdom of Ur, where the ruler enjoyed roaring at his lions, to San Diego, Calif., home of a popular panda cub today, zoos have provided public and private amusement and instruction for thousands of years. Krull’s fast-paced survey offers a different animal collection on nearly every page. Date and place serve as headings; a paragraph of description follows. She’s found intriguing examples including a “Garden of Intelligence” in ancient China, an aviary-cum–dining hall in Rome, a particularly extensive holding belonging to Aztec emperor Moctezuma II and a present-day bird park in Bali, Indonesia. She mentions zoo conservation work and the move toward natural housing for the animals. The text is lively and often humorous. There’s the elephant who sprayed a 16th-century pope and 15 “very confused American buffalo” in Grand Central Terminal in New York. Hall’s watercolor-and-ink illustrations, familiar to readers of the New Yorker and other magazines for adults, work equally well for a child audience. His fluidly drawn animals have amusing, slightly goofy expressions, the people are remarkably varied, and the settings include recognizable elements from historical times and places. Varying from vignettes to double-page spreads, these images add greatly to the overall appeal.

A romp through zoo history presented with pizzazz.