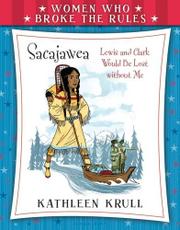 From the Women Who Broke the Rules series

This brisk and pithy series kickoff highlights Sacagawea’s unique contributions to the Lewis and Clark expedition.

Joining her “clueless” French-Canadian husband and so becoming “part of one of the smartest hiring decisions in history,” 16-year-old Sacagawea not only served as translator and diplomat along the way, but proved an expert forager, cool-headed when disaster threatened, and a dedicated morale booster during four gloomy months in winter quarters. She also cast a vote for the location of those quarters, which the author points to as a significant precedent in the history of women’s suffrage. Krull closes with a look at her subject’s less-well-documented later life and the cogent observation that not all Native Americans regard her in a positive light. In Collins’ color paintings, she poses gracefully in fringed buckskins, and her calm, intelligent features shine on nearly every page. The subjects of the three co-published profiles, though depicted by different illustrators, look similarly smart and animated—and behave that way too. Having met her future husband on a “date,” Dolley Madison (illustrated by Steve Johnson and Lou Fancher) goes on to be a “rock star,” for instance. Long before she becomes a Supreme Court justice with a “ginormous” work load, Sonia Sotomayor (illustrated by Angela Dominguez) is first met giving her little brother a noogie. Though Krull’s gift for artfully compressed narrative results in a misleading implication that the battle of New Orleans won the War of 1812 for the United States, and there is no mention of Forever… in her portrait of “the most banned author in America,” Judy Blume (illustrated by David Leonard), young readers will come away properly inspired by the examples of these admirable rule-breakers.

The author of the justly renowned What the Neighbors Thought series digs a little deeper with these equally engaging single volumes.