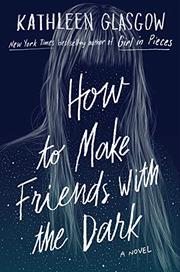 HOW TO MAKE FRIENDS WITH THE DARK

For more than 200 pages, readers endure with Tiger the two weeks that follow her mother’s death. A minor with no known living relatives, Tiger becomes a ward of the state of Arizona, sharing foster homes with kids who have been abused and abandoned. She finds herself responsible for the logistics of death, such as the funeral planning and ordering death certificates. Tiger obsesses over the last words she screamed to her mom, “Why can’t you ever just fucking leave me alone?” and refuses to take off the outmoded dress that was the last thing her mother ever bought her. The onslaught of grief and regret is so intimate that at times the novel feels claustrophobic, as if there is no escape. Which, of course, for Tiger, there isn’t. There’s only surrender to her new normal. A few glimmers of hope appear in the form of friendships and kindnesses, but this narrative is chiefly a first-person experience of the void left behind when the most important person in a young woman’s life is suddenly gone. It’s visceral and traumatic, pulsing with ache. Tiger is white, and many secondary characters are black and Latinx.

A gritty, raw account of surviving tragedy one minute at a time.