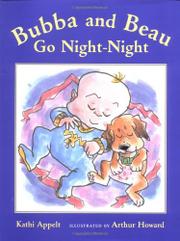 Following on the heels of their debut, this tale features Bubba and Beau out on the town for adventures with a whole new cast of interesting friends. Opening with a dynamite shot of Bubba and Beau peering over Big Bubba’s shoulders, Chapter One finds Bubba and Beau tucked into the cab of his truck as they head off to town accompanied by the twanging sounds of KBOB on the radio. “Sister, it was down the road again.” In Chapters Two and Three, the trio completes their errands: visiting with the regulars at the Feed and Seed; buying stamps at the post office; and thumping watermelons at Sam’s fruit stand. Three raspberry-swirl ice cream cones are on the menu in Chapter Four. After such an exciting day, the three should be ready for bed, but Chapter Five finds that Bubba and Beau have other ideas. The final chapter finds out what it takes to make the two go to sleep: another ride in Big Bubba’s pickup, Earl. Snappy pencil-and-watercolor illustrations feature the amusing cast of characters, providing honest down-home fun. No one will be able to resist the local flavor and sly fun of this boy and his dawg. (Picture book. 2-5)