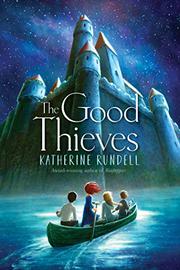 A Prohibition-era child enlists a gifted pickpocket and a pair of budding circus performers in a clever ruse to save her ancestral home from being stolen by developers.

Rundell sets her iron-jawed protagonist on a seemingly impossible quest: to break into the ramshackle Hudson River castle from which her grieving grandfather has been abruptly evicted by unscrupulous con man Victor Sorrotore and recover a fabulously valuable hidden emerald. Laying out an elaborate scheme in a notebook that itself turns out to be an integral part of the ensuing caper, Vita, only slowed by a bout with polio years before, enlists a team of helpers. Silk, a light-fingered orphan, aspiring aerialist Samuel Kawadza, and Arkady, a Russian lad with a remarkable affinity for and with animals, all join her in a series of expeditions, mostly nocturnal, through and under Manhattan. The city never comes to life the way the human characters do (Vita, for instance, “had six kinds of smile, and five of them were real”) but often does have a tangible presence, and notwithstanding Vita’s encounter with a (rather anachronistically styled) “Latina” librarian, period attitudes toward race and class are convincingly drawn. Vita, Silk, and Arkady all present white; Samuel, a Shona immigrant from Southern Rhodesia, is the only primary character of color. Santoso’s vignettes of, mostly, animals and small items add occasional visual grace notes.