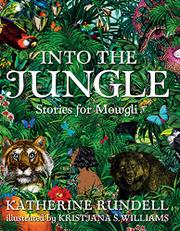 In this modern companion to The Jungle Book, the man-cub Mowgli listens to the histories of several original characters—including Raksha, Baloo, and Bagheera—which helps him understand his place in the jungle and among his people.

The collection begins with Father Wolf placing Mowgli between his paws and licking him clean, as he would with any other pup. When Mowgli asks for a story, Father Wolf tells him about Mother Wolf, Raksha, and her encounter with and subsequent escape from the fierce tiger Shere Khan. At the end of the story, Brother Wolf finds Mowgli and tells him that Raksha is looking for him. Mowgli mistakenly assumes he’s in trouble and takes off into the jungle, stopping along the way only to listen to more stories. Rapi the elephant tells Mowgli about Bagheera’s escape from the Maharana’s palace; Akela the wolf tells him how Baloo rescued his father from a group of villagers who had captured the older bear; Kaa the python talks about his experiences with a human snake-charmer. Barring a couple of places where the author has followed Kipling’s lead with an inaccurate translation (Raksha means “to protect” and not “demon”—Raakshas—as the text suggests), her follow-up makes for an engaging read, as Mowgli develops from a rather self-centered child to one who cares about his extended jungle family. Rundell’s values-based narrative and Williams’ earthy images reinforce the importance of different species’ understanding one another and working together.

Rundell emphasizes unity in diversity in this 21st-century companion to a complicated 19th-century classic.