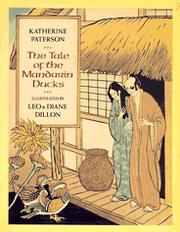 THE TALE OF THE MANDARIN DUCKS

A cruel Japanese lord is preparing to execute Yasuko, the kitchen maid who set free a lovely mandarin drake the lord had in captivity, and Shozor, the one-eyed servant who tried to take the blame in her place. Providentially, two messengers arrive to take the couple to the Imperial Court: they explain that after a vision of the merciful Buddha, the emperor has abolished capital punishment. Actually, though, the messengers are the duck and his mate in disguise; leading Shozo and Yasuko to a comfortable forest hut, they leave the loving couple there for a long, happy life together. Although the jacket describes this as a folk-tale, LC classifies it as fiction. Whichever, Paterson tells it with subtlety, grace, and her characteristic sensitivity to such troths as that "trouble can always be borne when it is shared." The Dillons, who have twice won the Caldecott Medal, have outdone themselves in these elegant, deftly limned illustrations in a Japanese style. In mellow, grayed hues and crisp black, each double spread appears in two borderless panels that allow the eye to make them one without catching in the gutter; the blocks of text are expertly incorporated in the handsome design. An outstanding contribution.